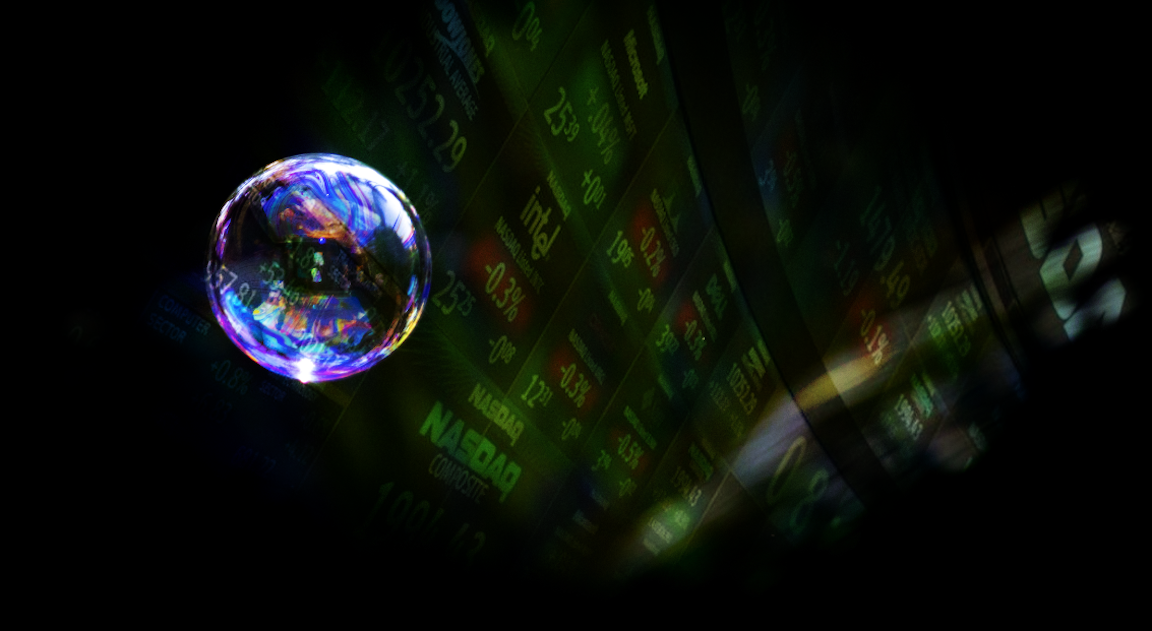 “Long US Tech” was identified as the most crowded trade in the world for the sixth month in a row (and the ninth in 12), in BofA’s latest global fund manager survey.

And yet, “tech bubble” ranked just third among the biggest “tail risks,” behind the virus and the US election.

Asked whether tech will continue to shoulder the burden of equity market leadership next year, 50% of respondents to the same poll said “yes,” while 43% said “no.”

This touches on one of the most vexing quandaries for market participants — namely, the prospect that even if a pro-cyclical rotation (catalyzed, for example, by reflationary fiscal policies) is desirable, and even if we’d all like to see a “healthier,” broader rally, one can’t help but speculate that due to how narrow leadership has become and the capacity for big-cap tech to generate revenue and profit growth in an environment where most other firms cannot, a changing of the guard isn’t just unlikely, it may be undesirable and even impossible.

But if you ask SocGen, it’s time to “diversify away” from big-cap US tech. “The sector has become more volatile,” the bank’s Alain Bokobza wrote, in a note dated Wednesday.

Indeed it has. The last two months have been defined by drama in tech land, where the knock-on effects of a monthslong retail options mania and a series of large trades by SoftBank, helped drive shares inexorably higher in an August melt-up that ultimately ended in a correction early last month. Over the past week, these dynamics have made a comeback of sorts.

In a separate note, SocGen’s equities derivatives team writes that while collapsing realized correlations (tied, for instance, to huge outperformance from tech versus laggards) suppressed index-level volatility in the lead-up to the September tech correction, there were (and still are) sings of froth.

“While the volatility contribution of [information technology and communication services] to the overall S&P 500 volatility remains below the astonishing c.70% levels reached during the tech bubble, we have seen shades of comparable contributions in August this year,” the bank’s Vincent Cassot, Jitesh Kumar, and Gaurav Tiwari wrote. Specifically, the monthly volatility contribution from those two sectors was ~64% in August.

The bank notes that low realized correlations between stocks (e.g., in the event big tech continues to outperform by a wide margin) could well keep index volatility compressed.

Cassot, Kumar, and Tiwari also write that earnings uncertainty (based on analysts’ estimates) for US tech is much lower now than it was during the dot-com years, for obvious reasons. In fact, earnings uncertainty for tech is just half of what it is for the broader index.

So, how does one explain higher Nasdaq 100 volatility? Well, as SocGen writes, this needs to be seen in “the context of volatility originating in the right tails – earnings uncertainty very rarely gets repriced due to risks to the upside [so] this NDX-SPX volatility spread may remain elevated until the enthusiasm for technology stocks runs its course.”

Further, the bank notes that volatility tends to be elevated both in very cheap markets and in very expensive markets. Right now, we’re in the latter.

Finally, most believe that the chances of tighter regulation on America’s tech behemoths would be higher under a Democratic administration and Congress.

I suppose what I would gently note is that Trump has been fairly aggressive in going after Amazon, Google, and Facebook. While US authorities and GOP lawmakers are ostensibly interested in the antitrust issue, Trump and some of his staunchest allies are also motivated by what they claim is “anti-conservative” bias. (In reality, it’s anti-far-right/alt-right bias, which is something entirely different.)

While regulatory risks may well rise in a Democratic sweep scenario, at least the motivation would be primarily centered around legitimate antitrust concerns and not some petty grudge tied to purported “shadow bans” or unfavorable search results.

In any event, SocGen’s Bokobza has a straightforward take on it all. “This heightened volatility has materialized at a time when two metrics threaten to undermine the sector’s remarkable outperformance,” he writes, citing “an improving economic outlook and a more challenging regulatory framework, the latter being exacerbated by the prospect of a Biden presidency.”

For the bank’s asset allocation team, that means it’s time to look for growth somewhere else, with one candidate being Asia Tech.

That comes with a few caveats, though, the most important of which is the downside from “political risk,” where that means “the tariff war between the US and China has morphed into a technological face-off.”

5 comments on “Amid ‘Shades’ Of Dot-Com Bubble, It’s Time To Switch Out Of Big US Tech, One Bank Says”