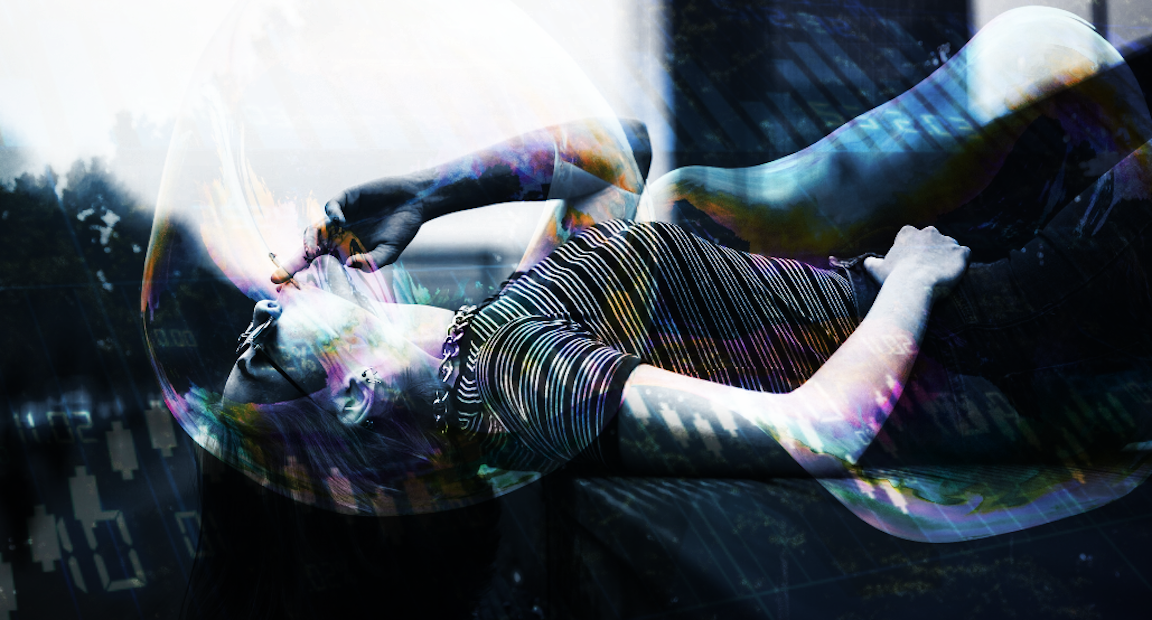 “The US equity market rally over the last few years, concentrated almost exclusively on FAAMG stocks, is hugely dependent on the goodwill of the bond market”, SocGen’s Albert Edwards writes, in his latest note, out Thursday.

That echoes a warning delivered in these hallowed (or is “hollow” better?) pages on any number of occasions over the past two years, including on Wednesday afternoon.

The inexorable rally in mega-cap tech is tethered to the duration infatuation in rates. Regular readers have heard this more times than they probably care to recount. As bonds rallied and the curve flattened into a “slow-flation” macro environment, secular growth names outperformed. Eventually, that outperformance took on a life of its own and became self-fulfilling in what Howard Marks famously described as a “perpetual motion machine” dynamic. The figure (below) helps illustrate the point.

The worry is that after years (upon years) of this, the broader market simply isn’t prepared for a pro-cyclical rotation — that even if the macro regime shifts due to massive global stimulus and a faster-than-expected recovery as vaccines and therapeutics become widely available, Value, small-caps, and the like simply aren’t capable of shouldering the burden.

This discussion took on an extra sense of urgency this week when 30-year yields in the US pushed back through their 200-day moving average for the first time in 2020 while lawmakers debated the details of a proposal to rein in, and perhaps even break up, tech behemoths.

Of course, as Edwards writes Thursday, this discussion is premature, to put it nicely.

After all, inflation is nowhere near target stateside and across the pond, Europe is chancing a deflationary spiral. “The recent eurozone inflation data convinces me more than ever that I should remain a zealot among bond bulls for a while yet”, Edwards says, noting that eurozone disinflation was a foregone conclusion.

“If you can only eke out a cyclical peak of 1% at the end of the economic cycle, what do you expect when recession comes knocking?”, Albert wonders. This, apparently:

As you might imagine, Edwards isn’t convinced that the US is out of the deflationary woods by any stretch — the Fed’s shift to average inflation targeting and fiscal-monetary “partnerships” notwithstanding.

After all, you have to demonstrate the capacity to create above-target inflation if you intend to let it run “hot” to make up for previous shortfalls. The Fed has not demonstrated that capacity.

Although the latest inflation data out of the US has generally surprised to the upside, Edwards is hardly alone in suggesting that the deflationary impact of the pandemic, combined with well-known structural factors, may continue to push the rest of the developed world in the direction of “Japanification”.

“My view is we are due another stunning decline in US core inflation (like we have just seen in the eurozone) and nominal 30y yields will be driven yet lower as inflation expectations catch up on the downside”, he said Thursday.

Some readers will be pleased to know that Albert does include a bit of his trademark balderdash, accusing central banks of drinking their own Kool-Aid, perhaps because doing so is good way to endear yourself to colleagues and prove your commitment to the profession. He cites the following excerpt from a new NBER Working Paper called “Fifty Shades of QE: Conflicts of Interest in Economic Research”:

Of course, every profession does this, right? If I’m a highly paid executive at Coca-Cola well, then, “Mmmmmm, Coke! It is so delicious and refreshing!” And also: “What cavities?”

“Do people really believe central banks’ upbeat forecasts of inflation returning to their targets anytime soon? Give me a break!”, Albert goes on to exclaim.

The good news is, as long as there’s a disinflationary impulse operating in the background and bond yields stay subdued with plenty of liquidity sloshing around, we won’t have to worry about a macro impediment to ongoing outperformance from the FAAMG ATM.

5 comments on “Albert Edwards Doubts Bond Selloff Has Legs. And That’s Good For The FAAMG Bubble”