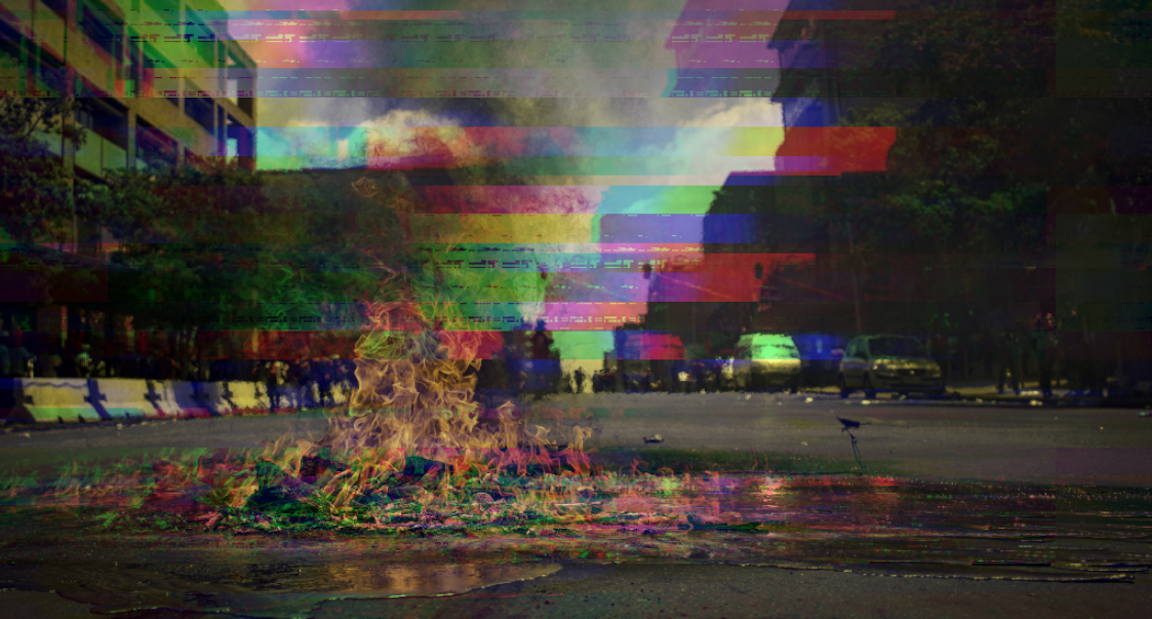 Things may have changed — forever.

That’s one takeaway from the latest note by Deutsche Bank’s Aleksandar Kocic, who, earlier this week, suggested that markets may be forced to cope with a “prolonged period of uncertainty and disorder” following the election.

“Uncertainty is now the only certainty”, Kocic said Tuesday, in the course of flagging various manifestations of fear and anxiety in options.

In a new piece expanding on that, he writes that in the past, democratic transitions were “volatility un-inspiring events”.

But that may have changed in a world where politics in some western democracies continues to exhibit populist overtones and where fringe actors manage to garner sizable support among the electorate and accumulate sway at the highest levels of power.

For a time, it was assumed that this turn of events was a mere “phase”, not a new “fixture” of western democracies. But that assumption has been challenged — and not just in the US, by the way.

“Although the current political landscape appears highly volatile and unpredictable, it is not unlikely that this novel uncertainty becomes an integral part of the new stylized facts of the future political landscape”, Kocic says, on the way to reiterating that, in electoral democracies, victories usually come from “small defections between the left and right centers”. That, he reminds you, is no longer the case. The defections are not “small” anymore.

But in the US’s case, deviation from the center isn’t the only epochal shift afoot. Donald Trump’s populism (defined by an awkward juxtaposition between extreme arrogance and concern for the humble everyman — between a silver-spoon upbringing and purported sympathy for blue collar workers — between a pathological aversion to any kind of self-sacrifice in the name of the common good and hyper-patriotism) has morphed into what I’ve called “soft authoritarianism”. Over the past six or so months, the “soft” qualifier has ceased to be applicable.

For example, asked by Fox’s Jeanine Pirro (for an interview set to air Saturday) how he would respond to “rioting” on election night, Trump said he would “put them down very quickly”. “We have the power to do that, if we want”, the president added. “It’s called insurrection. It’s very easy. I’d rather not, but if we had to, we’d do that and put it down within minutes”.

Addressing the social unrest in the US and The White House’s efforts to craft a response, Kocic puts things in a broader context.

“Political leaders, who bear dual burden of imperative of stability on one side, and the urge to change, on the other, are themselves running an enormous risk”, he remarks, adding that the push to reestablish order from chaos chances exacerbating the chaotic spiral.

“[Leaders] are tempted to counter the confusion of the present with will for order and, in that process, often increase the very chaos which they pretend to oppose, often risking to fall themselves victims to spiraling disorder of their own creation”, he writes, before noting that “based on the crescendo we have witnessed so far, there is no reason whatsoever to expect anything resembling a calm or an ordered, consensual finale of this turbulent year”.

He again cites vol calendar flies in the yen and VIX futures which, he notes, underscore the outlier character of 2M expiries.

“As the elections enter the horizon, event premium in 2M options is exceeding anything we have seen in the last decade and beyond”, Kocic says.

What I would add is that there seems to be a generalized refusal among many in the US electorate to come to terms with the reality of the rather acute political crisis facing the country. Or, to the extent folks do attempt to engage with it, they do so disingenuously to avoid confronting the prospect of autocratic rule, and their own role in acquiescing to it.

People get around this in a variety of ways — there are no shortage of coping mechanisms for those looking to blunt the psychological impact of reconciling their support (current or past, avowed or tacit) for a man whose every historical word and deed was a red flag vis-à-vis his bid for high office.

Most of these coping mechanisms entail some manifestation of blaming the victim. For example, a common way to avoid engaging with the reality of 193,000 dead Americans and the president’s on-tape, recorded admission (to Bob Woodward) that he deliberately played down the pandemic and hid information from the public in February and March, is to claim that state and local officials’ stay-at-home orders during the pandemic somehow cost lives (on net) due to mass suicides, drug addiction, and incalculable (by definition) future psychological damage, among other things.

Similarly, one common refrain to avoid a head-on collision with the legacy of slavery and endemic racism that pervades virtually every aspect of African Americans’ daily existence in a country which continues to oppress them, is to blame African Americans for “hurting their own cause” by taking to the streets to demand equality.

Finally, when confronted with the inescapable financial reality of the Trump tax cuts (i.e., that they were, for the most part, a handout for the wealthy and for corporations), lower- and middle-income voters tell themselves ghost stories about socialism, which is everywhere and always equated with Venezuela, never with myriad examples of flourishing socialist systems in highly advanced, highly egalitarian (compared to the US, anyway) economies.

These are the psychological contortions of a society that is vulnerable to authoritarian rule. In March of 2019, following William Barr’s blatant distortion of the Mueller report, I wrote that “having crumbled the country’s institutions and having essentially antiquated the whole idea of ‘checks and balances’, Trump faces a new challenge: Shaping and defining autocracy in America”.

“One wonders if he appreciates the gravity of that”, I went on to muse.

I still doubt whether Trump does, in fact, understand the ramifications of his actions. I doubt seriously it’s occurred to him that this particular manifestation of his penchant for defrauding (psychologically or otherwise) people isn’t confined to the directly aggrieved. This isn’t “Trump U”.

The US is on the brink of becoming an autocracy, and American society is so collectively undereducated and oblivious to the most basic of tenets of their own form of government, that many voters don’t even know what’s happening to them.

Deutsche’s Kocic writes that “in our view, the main problem that could arise during the elections is that the actual results will be unknown the day after and that there will be multiple rounds of back and forth with heavy contestation of their legitimacy and therefore escalation of tensions and protracted risk-off trade”.

It could very well be that America never knows the results of the election.

As the president suggested in remarks to Fox’s Pirro, any person or groups of people who decide to express incredulity in the event Trump declares a resounding victory on election night, will be “put down”. And “very quickly” at that.

20 comments on “Crescendo 2020: ‘There’s No Reason Whatsoever To Expect Anything Resembling Calm’”