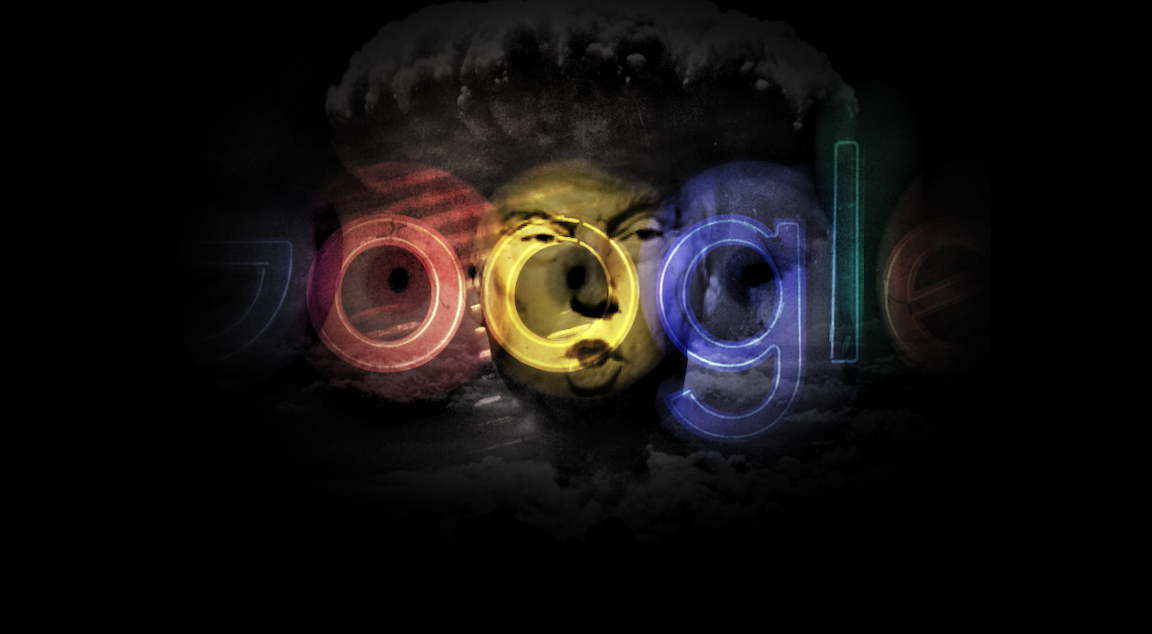 “Way” back on May 16, I wondered if Donald Trump would gamble 20% of the US stock market in pursuit of his grudge against big-cap tech.

At the time, the president had just finished up one of his signature Saturday Twitter marathons.

“The Radical Left is in total command and control of Facebook, Instagram, Twitter and Google”, Trump declared, in one of nearly three-dozen tweets and retweets posted by lunchtime that day. The irony of making the claim via tweet was apparently lost on the president.

“The Administration is working to remedy this illegal situation”, he seethed. “Stay tuned, and send names [and] events”.

The previous day, The Wall Street Journal reported that Google would probably face at least one antitrust lawsuit tied to its advertising business by the end of the year.

Fast forward four months, and antitrust action against Google is imminent. That’s according to no less than five people briefed on the matter who spoke to The New York Times for a lengthy piece documenting the internal deliberations.

“The Justice Department plans to bring an antitrust case against Google as soon as this month, after Attorney General William Barr overruled career lawyers who said they needed more time to build a strong case against one of the world’s wealthiest, most formidable technology companies”, the Times said Thursday evening.

The timing leaves something to be desired. The story hit just after the closing bell on Wall Street, where tech shares took their worst beating since the March panic. Alphabet, which dropped 5% during regular trading, fell another 1.2% after hours.

According to the Times, Barr’s DoJ effectively instructed the lawyers (some 40 of them) working the case to “wrap up their work” by the end of this month.

“Some argued this summer in a memo that ran hundreds of pages that they could bring a strong case but needed more time”, the Times goes on to say, adding that “the lawyers viewed the deadline as arbitrary [and] expressed concerns that Barr wanted to announce the case in September to take credit for action against a powerful tech company under the Trump administration”. (Imagine that.)

In late May, Trump issued a somewhat farcical executive order on social media “bias”. Virtually no one took it seriously at the time. I argued it needed to placed in the wider context of the president’s increasingly authoritarian leanings, especially considering recent efforts on the part of Twitter and Facebook to fact check his manifestly false claims. Those efforts continued on Thursday when Twitter placed public interest flags on two of his tweets which encouraged Americans to vote twice in the election. (As dangerous as Trump’s double-voting “suggestion” most assuredly is, one can’t help but chuckle at the sheer brazenness — once again, satire is dead and buried in the Trump era.)

For market participants, I suggested the executive order should be considered in the context of the bipartisan push to regulate America’s tech titans, which have been under a microscope for years. There’s broad support on both sides of the aisle for regulation and antitrust proceedings, should evidence suggest the latter is warranted.

So, it was never a matter of whether Trump’s order was or wasn’t laughable or even whether it had anything whatsoever to do with any antirust charges. Rather, it was notable for its place on a wall that already had quite a bit of writing on it. The political backlash against the “gods“, as it were, is growing. And it’s now poised to manifest in charges.

The tech divinities are largely responsible for propelling US equity benchmarks to record highs. Their share of the market has exploded in the post-pandemic world.

Trump’s grudge against Google and Facebook stems from his long-standing contention that the companies are engaged in a conspiracy aimed at overthrowing his administration. That, despite the unanimous conclusion of America’s intelligence agencies that Russia utilized sophisticated social media campaigns to assist his bid for the Oval Office. Trump’s allegations against Facebook seem even more dubious when you consider how adept his campaign is at wielding the platform to his advantage (legally).

Last year, Trump went so far as to regale the UN General Assembly with his theory about social media bias. His remarks were entirely consistent with the attorney general’s almost theocratic vision for America. In October, Barr gave a speech at Notre Dame during which he hewed to similar talking points.

While both Republicans and Democrats support a crackdown on America’s tech giants, the risk to near-term market performance of undermining them and otherwise injecting uncertainty into their medium-term prospects is considerable.

“Excluding Info Tech, S&P 500 EPS fell by 41% in Q2”, Goldman wrote earlier this month, in a summary of the worst quarter for corporate America in recent memory.

“The five largest stocks in the S&P 500 (FB, AMZN, AAPL, MSFT, and GOOGL, or ‘FAAMG’) account for 16% of S&P 500 EPS, and each of those companies beat consensus sales and EPS estimates by more than one standard deviation in the quarter”, the bank’s David Kostin went on to say, adding that “in aggregate, FAAMG EPS grew by 2% YoY in Q2 compared with an aggregate decline of -38% for the other 495 S&P 500 companies”.

When it comes to prospective charges against Google, Trump may have undermined his own cause by failing to exercise self-restraint. The company’s lawyers “hope to seize on Trump’s politicization of the matter should the Justice Department sue the company”, the Times says, before noting that data from social media companies undermines Trump’s claims and similar accusations leveled by Ted Cruz and Jim Jordan. In fact, data suggests Republicans “are among the most visible figures” on social media.

But that’s not going to stop The White House from pushing the issue. Especially not when powerful Democrats are on board, albeit for different reasons.

It should be noted that some of those reasons are good ones. It’s also important to note that over the longer-term, all of these companies are likely to be just fine (where that means investable), even if they’re forcibly broken up. But their near- to medium-term outlook would be clouded considerably by aggressive litigation.

Coming back to the original question from May — “Will Donald Trump gamble 20% of the US stock market in pursuit of his grudge against big-cap tech?” — the answer in September is “no”.

Instead, thanks to the run-up in tech shares over the summer, he’ll gamble 23% of the market on that grudge.