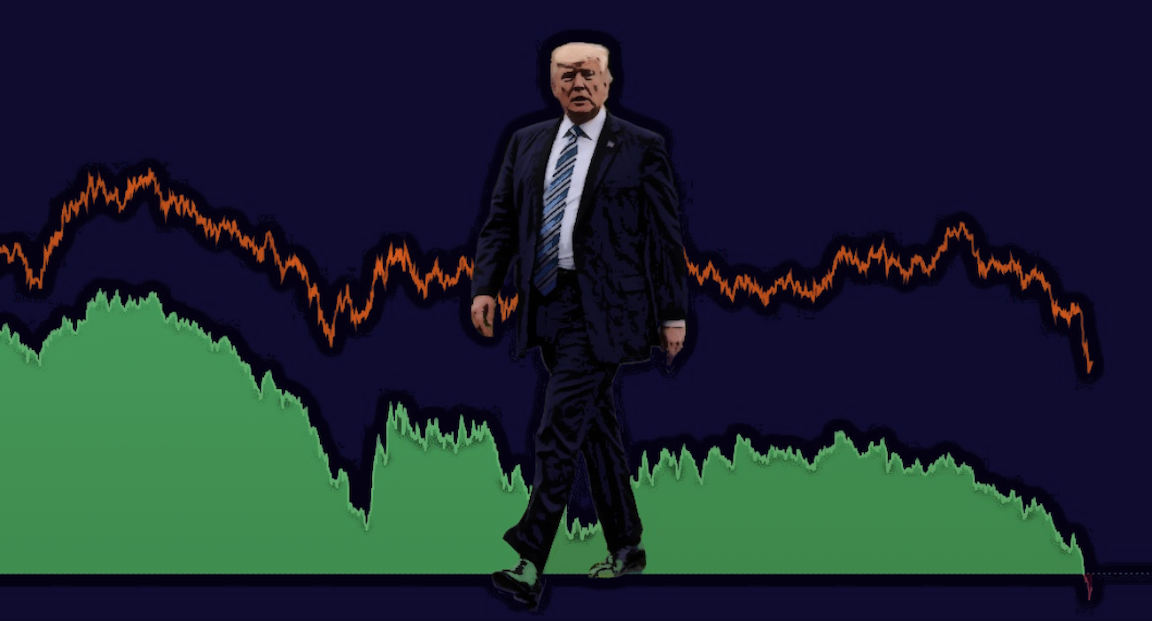 Donald Trump paid no federal income taxes in 10 of the past 15 years, and just $750 in 2016, the year he transformed the US presidency into a high stakes version of his reality TV show persona.

The records, obtained by The New York Times, suggest Trump’s boasts of superhuman business acumen are largely fictitious — a figment of his own imagination and a product of delusions of grandeur, self-deception, or, more likely, both.

Contrary to the grandiose narrative he sold to the public, to the IRS Trump is a man who reports “chronic” (to quote the Times) losses which he leans on “aggressively” to avoid paying taxes.

The Times is in possession of what it says are more than two decades worth of Trump’s tax return data, including information on his own finances as well as those of “hundreds” of associated companies. The information covers his first two years in office, but does not include personal returns for 2018 and 2019.

The inescapable conclusion, the Times says, is that “Trump has been more successful playing a business mogul than being one in real life”.

The president made some $428 million from “The Apprentice” and associated licensing and endorsement deals, money which was subsequently plowed into golf courses which sound like black holes. The Times says those investments “devoured cash”.

Especially notable is the stark contrast between the revenue figures reported in his annual financial disclosures and data on profits, which the Times now has. In 2018, Trump’s financial disclosures showed he made more than $430 million. His tax records, on the other hand, show a bottom-line loss of $47.4 million.

There are question marks throughout. For example, general and administrative expenses at his Bedminster property jumped fivefold over just one year (2016-2017) with no explanation.

This does not, the Times emphasizes, appear to be a case of a savvy businessman employing guile and a mastery of tax loopholes to save money. Rather, the returns indicate something far more pedestrian. “He is simply pouring more money into many businesses than he is taking out”, the Times notes, adding that “most” of Trump’s core businesses are losing millions, “if not tens of millions” year in, and year out.

Over the next half-decade, some $300 million in loans come due. Trump is personally responsible for all of them.

Make no mistake, this is an exhaustive investigative endeavor. Try as he may, Trump will have a difficult time with this. Consider the following passage from the Times explaining the scope of the inquiry:

The Times examined and analyzed the data from thousands of individual and business tax returns for 2000 through 2017, along with additional tax information from other years. The trove included years of employee compensation information and records of cash payments between the president and his businesses, as well as information about ongoing federal audits of his taxes. This article also draws upon dozens of interviews and previously unreported material from other sources, both public and confidential.

All of the information The Times obtained was provided by sources with legal access to it. While most of the tax data has not previously been made public, The Times was able to verify portions of it by comparing it with publicly available information and confidential records previously obtained by The Times.

As in-depth as the investigation is, it does have limits, the Times notes. There is no new information about payoffs to Stephanie Clifford, for instance.

There is, however, a “full accounting” of transactions related to the 2013 Miss Universe pageant in Moscow. Trump made $2.3 million from the event personally, and as the Times points out, it was “made possible, at least in part, by the Agalarov family, who would later help set up the infamous 2016 meeting between Trump campaign officials seeking ‘dirt’ on [Hillary] Clinton and a Russian lawyer connected to the Kremlin”.

The key to Trump’s tax “success” is quite simple, really. He takes money extracted from his name and celebrity, puts it into loss-making enterprises, and then cites those losses to absolve himself of the responsibility to pay taxes.

Some $1 billion in losses incurred during the early 90s (as previously reported by the Times) helped shield Trump up through 2005, around the time revenue from the “The Apprentice” started to roll in.

With the carry forward exhausted, Trump was left with no choice. He had to pay taxes. The $70.1 million Trump paid from 2005 through 2007 is described by the Times as the first substantial federal income taxes Trump paid in his entire life. Not surprisingly, he eventually asked for that back. And received it. The refund ($72.9 million) is now the subject of an audit.

His golf courses are, in two words, a disaster. Since 2000, they have produced a combined loss of $315.6 million, according to the Times. His Washington hotel: A loser. To the tune of $55.5 million through 2018. Trump Corporation, his real estate services business: A loser too, logging $134 million in losses over the past two decades.

It goes on, and on, and on. The Times’s exclusive reporting, out Sunday evening, could be a small book. It spans thousands upon thousands of words, and the paper indicates it is by no means done with Trump. Sunday’s novella is merely an “overview”, the Times says. “Additional articles will be published in the coming weeks”.

In one particularly poignant passage, the Times describes what Trump’s accountants were up to in 2015 as he made the campaign rounds regaling the public with tales of his fabulous wealth and legendary business prowess. I’ll leave you with one final excerpt, presented without further comment:

After tabulating all the profits and losses from Mr. Trump’s various endeavors on Form 1040, the accountants came to Line 56, where they had to enter the total income tax the candidate was required to pay. They needed space for only a single figure.

For Mr. Trump, that bottom line must have looked familiar. It was the fourth year in a row that he had not paid a penny of federal income taxes.

25 comments on “Trump’s Tax Returns Revealed. They Are A Disaster”

Leave a Reply to Man of Lourdes Cancel reply