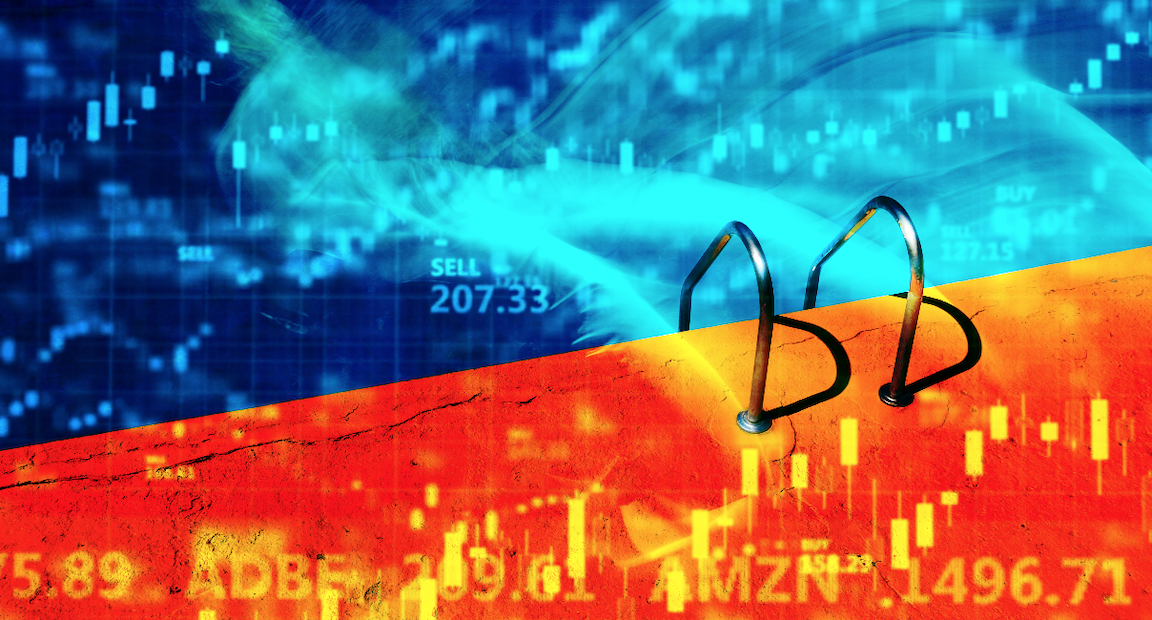 If you’re searching for a reason to fret about US equities perched at record highs on dot-com multiples, you needn’t look very far.

While it’s true that the data stateside has generally surprised for the better, the outlook remains tenuous, especially given the stalemate in D.C., where Donald Trump is apparently convinced that his executive orders are sufficient to sustain a nascent rebound from the worst three-month stretch for the US economy since the Great Depression.

Virtually nobody agrees with him on that point, of course, but that’s hardly new territory for Trump. No one agrees with him completely on anything, and it’s becoming more difficult by the week to find anyone other than Mike Pence and Mark Meadows who even partially concurs with him on the hodgepodge of mission-critical issues facing the country.

But that’s well-worn territory. Stocks clearly don’t care. And neither does credit.

However, there is a technical risk for equities approaching, Nomura’s Charlie McElligott says.

“With respect to broad US Equities indices… this is one high-profile ‘crowded’ trade which still hasn’t been ‘rinsed'”, he remarked, in a Monday note.

This will sound familiar to regular readers. The power of the “pin” (so to speak) that’s insulated equities from exaggerated swings is poised to diminish — and materially so.

“SPX/SPY options $Delta remains historically very high at 94th %ile (since 2013) and with QQQ $Delta even more extreme over 97th %ile, which could now matter given that this week’s expiration should see a TON of Gamma rolling-off”, McElligott notes.

With dealer hedging requirements thus poised to “drop precipitously” (as he puts it), the door is open to bigger directional moves. “We could see a powerful ‘unclenching’ and thus potential for a much larger trading distribution thereafter”, Charlie goes on to say, noting that the gamma “drop-off” in SPX is ~30% post-Friday, “with the largest 3,400 strike likely seeing a 39% decline post-expiry”.

He sets that against asset manager longs, which he flags as sitting in the 94th percentile, “indicative of the potential that Real$ is ‘topped-up'”.

On the other hand, he does note that short-covering from leveraged funds could serve as an offset.

Meanwhile, Morgan Stanley’s Mike Wilson (who has been consistently bullish since the March lows) cautions that a continuation of the back-up in yields seen last week could trigger a correction for stocks — at least in the near-term.

Although the rise in yields was tame considering the circumstances (a record refunding and better-than-expected macro data), Wilson notes that if the trend were to persist, it could be “challenging to many equity portfolios that embed higher long duration risk than may be appreciated”.

Remember: the steady grind lower in yields and concurrent bull-flattening in the curve has catalyzed outperformance from secular growth shares and other equities expressions tethered to the “duration infatuation” in rates. This has been going on for years, and due to the attendant factor crowding, it’s possible that many market participants have, as Wilson suggests, simply lost track of how much duration risk is embedded in the stock rally as it currently exists (i.e., growth, momentum, quality, etc. perpetually outperforming small-caps and cyclical value, with only fleeting rotations which never seem to stick).

Ultimately, that doesn’t deter Morgan’s bullishness, though. Higher yields would be read as growth-positive, and therefore supportive of a better outlook for the domestic economy, the bank suggests.

For his part, McElligott thinks the selloff in rates and the concurrent steepener have likely run their course in the near-term. “It is my view that part of the tactical UST Shorts and Steepeners will begin to take profits… over the course of the next few weeks, especially with the drag of the ongoing US fiscal stimulus standoff continu[ing] to haunt risk sentiment in the background”.

Commenting on the same dynamics, BMO’s Ian Lyngen, Benjamin Jeffery, and Jon Hill said Monday that “US rates are poised for a week of reflection” after last week’s moves. The data is scarce and nominal supply is limited the 20-year sale. “The drift lower in yields despite the bid for equity futures is an all too familiar ‘default’ trend for a market in the process of achieving a new equilibrium”, they wrote.

0 comments on “Gamma Drop-Off And Rates Back-Up (A Pair Of Risks. Maybe.)”