So this morning, one of the most read stories on CNBC’s website features Paul Gambles, (Paul is the managing director at Thailand-based advisory firm MBMG Group) talking about FANG stocks and Paul isn’t particularly enamored with the “value” proposition there.

Specifically, he calls the FANGs “egregiously” overvalued, on the way to saying the following about Facebook’s apparent failures to address privacy issues the company has been aware of for years:

I think the really interesting thing is it shows sort of the kind of fairyland that FANGs have been operating in. Zuckerberg has known for a long time about this particular vulnerability.

Well as it happens, we’ve got the longer version of Paul’s take on Facebook (and FANGs more generally) and in light of this morning’s comments on CNBC, we thought you might like to give it a read.

“We always wondered if Facebook might be profoundly evil”, say people who’ve been using it for years

It’s been quite a tumultuous few days for Facebook, since a whistle-blower alleged that the social media giant was exploited by Cambridge Analytica to extract the personal information of billions of users.[1]

Between its IPO in May 2012 and its highest point so far, in February this year, Facebook has seen a 400% rise in price. 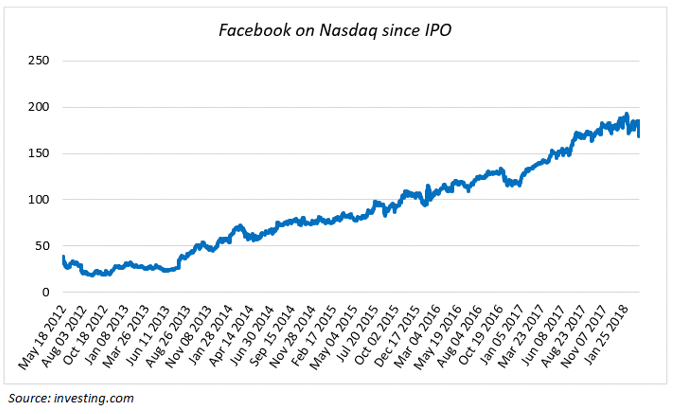 However, the bad publicity has resulted in Facebook’s share price taking a significant nosedive. It goes to serve as a warning that individual stock trends can change rapidly, even to one of the market’s strong long-term performers. 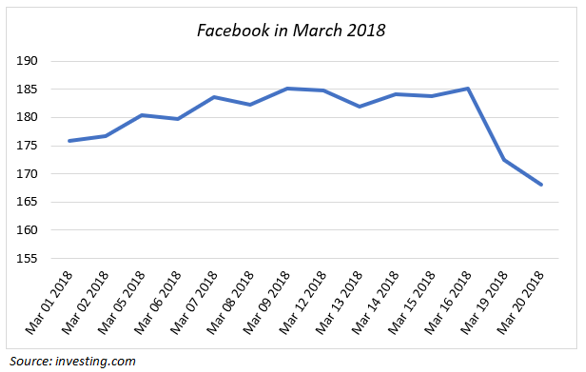 We don’t yet know how long this downturn will last; although the allegations into how easily Facebook was opened up to reveal personal data seems disturbing. Nevertheless, there are a couple of lessons investors can take from this past few days.Firstly, it shows why, for most investors, stock-picking is little more than playing in a casino: if a share price that has consistently increased in value over five years or so can fall away so rapidly, then imagine how sensitive prices of some of the less successful tickers could be. With regard to Facebook, we had previously noted a comment made by Mark Zuckerberg last year, that he was very interested in the trend towards Blockchain and even cryptos as indications of the move by users towards end to end data encryption.[2] At the time, this caused us to ask the questions:

The reality is that we decided that we had no way of answering those questions. Nor did Mark Zuckerberg; but at that point, holding any exposure to Facebook became either an exercise in collecting nickels in front of a giant bulldozer or simply a bet on Zuckerberg and his team to solve these riddles better and sooner than anyone else. Neither of those really fitted in with any approach that we might have as to how client should invest their money.

That leads me to my second point. Investing in indices (particularly those based in the US) is an expensive business nowadays, in the sense that the fee-savings inherent in ETFs and other passives are hugely outweighed by the compulsion to constantly keep allocating to the most overvalued stocks within the universe of an index. Nevertheless, they are still driven up by just a handful of firms. Just as the Hot Stocks of the 1920s, such as Ford and RCA,[3] were large corporations built on new technology; so, as we’ve previously commented, it is today with the FAANGs (Facebook, Apple, Amazon and Google). Yet these modern powerhouses don’t represent a magic bullet for investors any more than their equivalents did in the Roaring Twenties. In fact, in recent weeks, changes in prices in the FAANGs and America’s major indices has been eye-opening (see chart): 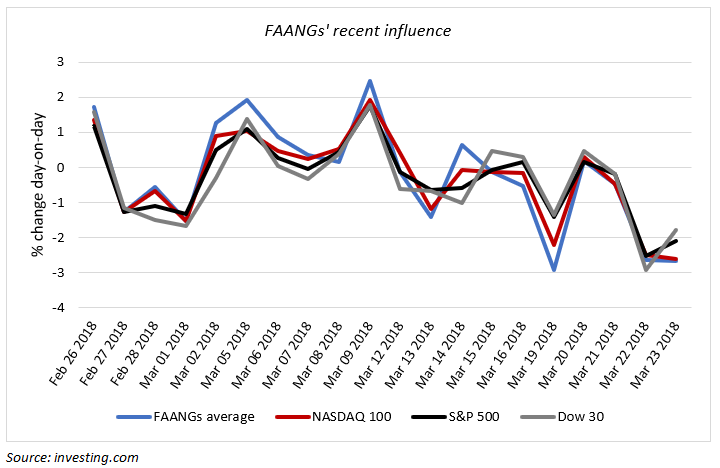 In such an unstable socio-economic environment, having most of your eggs in one basket isn’t a good thing. That’s why it’s important for investors to diversify both assets and strategies. By assets, I don’t just mean buying different shares — I mean choosing funds based on asset categories, such as indices, commodities, bonds, currencies etc. But it’s also a good idea to diversify strategies: only going long, for example, means you miss out on genuine opportunities to make a return, in some ways the easiest returns, from falls in asset prices. In fact, all of the seven hedge-fund and absolute-return strategies we’ve highlighted in our recent client reports are performing well this month. None of them were holding significant exposure to Facebook. The below chart highlights the contrast in the performance of some of those and Facebook over the last month: 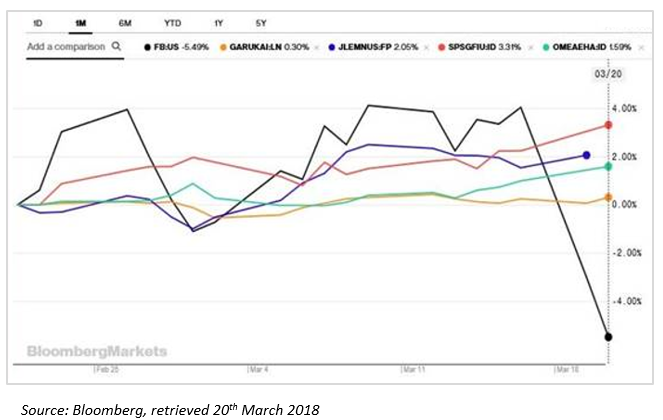 Not only does this prove why it’s important not to rely too heavily on individual stocks, whatever their reputation, but also the necessity to vary your approach. Our eyes may be drawn right now to Facebook’s dramatic plunge but it shouldn’t be ignored that, prior to that, it was outperforming all of the funds, albeit at significantly higher volatility, for most of the month.Finally, investors should also ensure that the mix in their portfolios is updated regularly. What was bringing in returns a couple of years ago may not be doing its job today. With such a huge array of possibilities in terms of portfolio content and weighting, it’s worth speaking to a fee-based, independent advisor, who can help you find the investment plan and content which suit you best. After all, everyone is different.

3 thoughts on “‘FANGs Are A Fairyland, The Sector Is Almost Fake’: Analyst”

Questions, tips or inquiries of any kind: walt@heisenbergreport.com

How Bitcoin Can Replace The Dollar

The Children Are Starving

The ‘Revolution’ Robinhood And Reddit Are Looking For Happened Years Ago

How Bitcoin Can Replace The Dollar

February 12, 2021February 21, 20216 min read
Folks are worried about stock trading. Specifically, too much of it. A nebulous adage cautions…

The Children Are Starving

February 11, 2021February 13, 20217 min read
On behalf of the millions of children currently living in poverty in the US, allow…

The ‘Revolution’ Robinhood And Reddit Are Looking For Happened Years Ago

January 28, 2021February 4, 20215 min read
Any hope that America would regain its senses and become collectively sane again following one…

January 25, 2021January 27, 20215 min read
On New Year's Eve, as the curtain closed on what, for those lucky enough to…
Please support this website by adding us to your whitelist in your ad blocker. Ads are what helps us bring you premium content! Thank you!