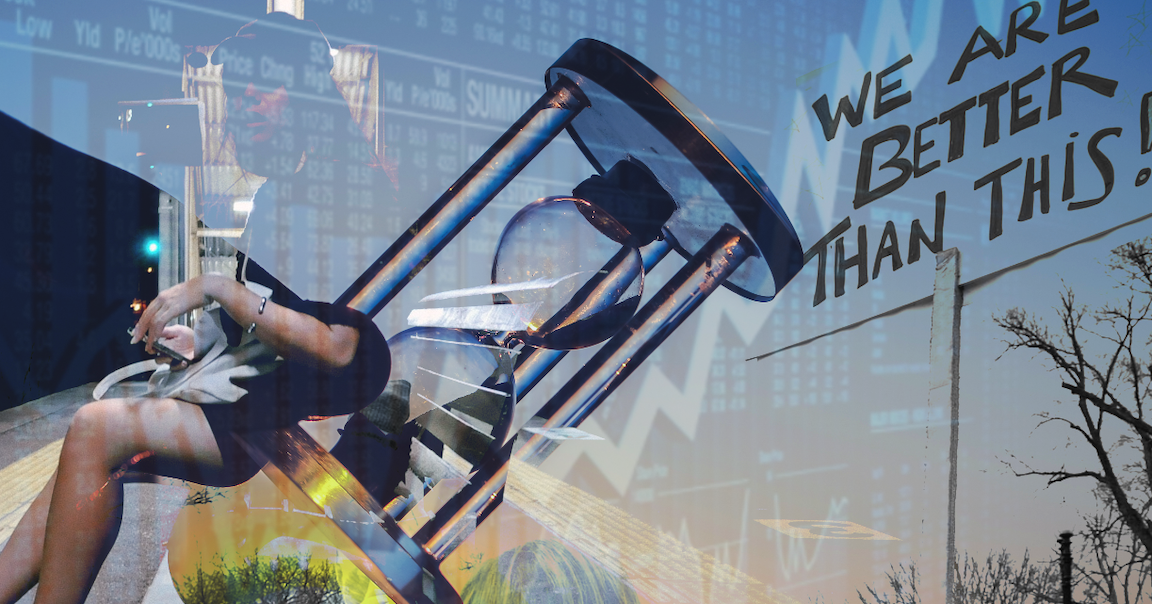 Traders are staring down a data-heavy week ahead of Election Day in the US, as durables, consumer confidence, claims, personal income/spending, and, of course, the first read on third quarter GDP, headline a crowded docket stateside.

Obviously, Q3 GDP will show the US economy staged a dramatic rebound in the three months following the catastrophic collapse that accompanied the pandemic lockdowns. In short, the worst quarter for the world’s largest economy was followed immediately by the best, as a mechanical bounce akin to that witnessed in the labor market played out across July, August, and September.

It’s likely the Trump administration will attempt to push the manifestly absurd narrative that the US economy is now “better than ever,” the same way Mike Pence suggested labor market gains in May, June, and July represented job “creation” as opposed to the recouping of the unthinkable tragedy that unfolded during the previous two months. Below, for reference, is what the rebound in GDP will probably look like.

The significance of this for markets is likely to be muted. It’s backward-looking, but more importantly, it comes ahead of two enormous event risks in November, when the election and expected vaccine approval will help determine whether expectations of a pro-cyclical rotation tied to a more reflationary macro backdrop were misplaced (or not).

“We expect a Democratic sweep will have only a modest net impact on the medium-term path of S&P 500 earnings,” Goldman said late Friday. “Our analysis suggests that the combined effects of higher corporate tax rates, more fiscal spending, and lower tariffs under the proposed Biden-Harris policy agenda will result in annualized S&P 500 EPS growth of 13% through 2024, similar to our baseline forecast that assumes no policy changes.”

This is broadly consistent with the idea that pro-growth policies which focus on demand-side stimulus are likely to produce outcomes that will offset the supply-side drag from higher tax rates, the burden of which will fall on the rich, who have the lowest marginal propensity to consume.

Read more: Analysis Versus Propaganda: Whose ‘Plan’ Is Really Better For The World’s Largest Economy?

As for the near-term outlook for stimulus, the stalemate between Nancy Pelosi and Steve Mnuchin remained over the weekend. As documented here, a deal between Pelosi and Mnuchin seemed imminent as late as Thursday, with both sides expressing optimism around a package worth some $2 trillion.

Mitch McConnell and other Senate GOPers, however, indicated that even if a bill were drafted, blessed by Trump, and pushed through the House, its chances of becoming law were slim. Democrats last week blocked what they called a cynical bid by McConnell to resurrect a “targeted” relief bill from September, deriding it as a “sham.” For his part, Trump insisted he could bring reluctant Republicans on board, but there was scant evidence to support the president’s claim.

On Sunday, Pelosi blamed The White House for the ongoing gridlock, while Mark Meadows insisted the opposite is true. But, as ever, it really comes down to McConnell.

“It could happen this week in the House,” Pelosi told CNN, before noting that “as to whether it will happen in the Senate,” the onus is on Mitch. “We want it the sooner the better, and that’s why we’re making concessions,” she added.

A selloff in Treasurys which pushed long-end yields to multi-month highs and steepened the 5s30s to the widest since December 2016 stalled on Friday amid fresh signs of Beltway bickering.

At this juncture, it’s by no means clear that anyone is particularly keen on breaking the logjam prior to the election, but I suppose you never know. After all, we’ve gone from Trump killing the negotiations, to Trump calling for more money than Democrats, to Pelosi and Mnuchin being on the verge of putting pen to paper, to another stalemate, all in the space of just three weeks.

McConnell needs 13 Republicans in the Senate to vote for any deal. “We’ve identified those Senate Republicans most likely to vote for it,” Meadows remarked on Sunday, going so far as to say that he has “a commitment from Leader McConnell that if we have an agreement he’s willing to bring it to the floor and get it passed.”

Promises, promises. The Senate will depart Washington Monday after a vote on Amy Coney Barrett and the House is already away. “Both could be called in for a vote with 24 hours notice, though that scenario is unlikely in the week before the national election,” Bloomberg dryly notes.

Meanwhile, there are signs that some traders think the consensus narrative around a “blue sweep” and attendant fiscal impulse may be misguided. You’re reminded that shorts in the long-end have multiplied alongside options bets hedging against higher yields, as the market increasingly prices in a Biden victory and a flipped Senate.

But Bloomberg’s Edward Bolingbroke points out that some market participants are wagering that consensus could be wrong or, at the least, that the read-through for Treasurys isn’t as clear-cut as it seems. He flags a pair of options trades, “one with a $20 million premium, express[ing] conviction that an increase in 10-year yields will stall ahead of 1% [and] another wager[ing] that traders are paying too much to hedge against higher yields.”

It goes without saying that if Republicans hold the Senate, the chances of massive stimulus would be lower no matter who occupies the Oval Office. That would point to less spending, less coupon supply, and quite possibly a more sluggish pace of growth, leaving yields to languish in a kind of purgatory.

At the same time, any disappointments on the vaccine front and/or dramatic upticks in the number of COVID-related fatalities could further undermine bets on higher yields and a steeper curve.

The BOJ and the ECB are also on deck in the week ahead. Given recent events, you can expect Christine Lagarde to strike a cautious tone. Indeed, she’ll probably go ahead and set the stage for an expansion of the pandemic purchase program later this year.

Europe is seemingly on the verge of a double-dip recession. Some would say it’s unlikely the US will suffer a similar fate. But really, it’s not up to humans. It’s up to a virus or, as Trump calls it, a “great and powerful plague.”