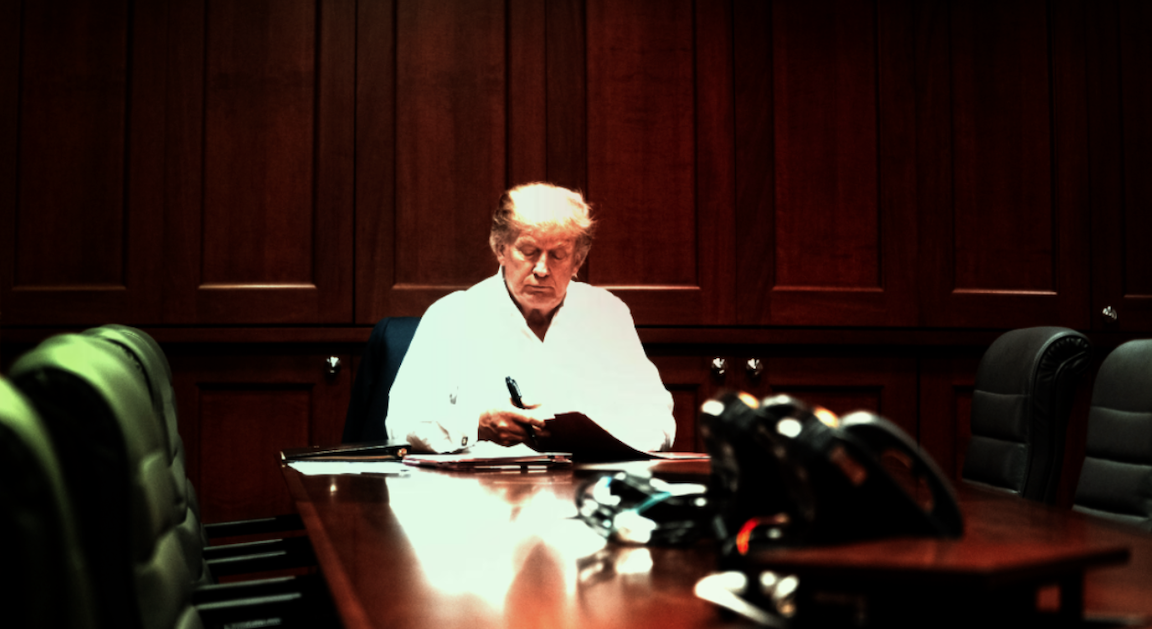 “We’re getting great reports from the doctors”, Trump began, in another propaganda-style video posted to Twitter. “I also think we’re going to pay a little surprise to some of the patriots that we have out on the street”.

The reference was to a small gathering of supporters camped outside Walter Reed. “They’ve been out there for a long time, and they’ve got Trump flags”, the president continued, waving his hand for effect.

It’s true, they have “been out there for a long time” and they do have flags — more Trump flags than American flags it would appear, at least on a quick visual inspection.

Minutes later, a masked Trump got into a motorcade and, in what was quickly derided on social media as a highly unfortunate and wholly farcical stunt, drove around in a circle, waving at fans through bulletproof glass.

One supporter held up a giant, cardboard cutout of the president’s face. Others chased after his SUV waving banners. Traffic was stopped and security ensured no one approached the vehicles.

Trump was reportedly upset with Mark Meadows over the weekend for describing the president’s condition in stark terms. For his part, Conley wasn’t straightforward with the press on Saturday about Trump’s use of supplemental oxygen. He cleared things up on Sunday, where that means he just told the truth. Trump did, in fact, receive oxygen Friday at The White House, consistent with media reports. He’s also on dexamethasone.

When considered in the context of Trump’s vanity and penchant for showmanship, Sunday’s publicity stunt was hardly surprising. To the president, it probably seemed harmless — a low-risk way to boost his own morale, acknowledge diehard fans, and make a point about his own vitality.

And yet, as ever, Trump doesn’t seem to appreciate the parallels between his behavior and that of autocrats. Posting videos and organizing unnecessary public appearances for the purpose of dispelling rumors about the health of a country’s leader is the stuff of authoritarian regimes. It’s the kind of behavior one would expect from Pyongyang or Damascus or Caracas or Tehran.

Others lamented the plight of Secret Service personnel who had no choice but to risk contracting the virus so that Trump could drive through an intersection.

Meanwhile, The Wall Street Journal confirmed what many suspected: Trump did not disclose his first positive COVID-19 test. A rapid test came back positive Thursday, prior to a cameo on Fox News during which he didn’t reveal the result.

“Under White House protocols, the more reliable test that screens a specimen from deeper in the nasal passage is administered only after a rapid test shows a positive reading”, the Journal writes, noting that “based on people familiar with the matter, the president’s tests followed that protocol”.

Sources also suggested Trump instructed one adviser to keep their own positive test from the public. “Don’t tell anyone”, Trump reportedly said.

As for the parallels between Trump’s Sunday drive-by and authoritarian regimes, you’re reminded of Vladimir Putin’s message to the US president on Friday. “I am sure your inherent vitality, spirit, and optimism will help you cope with the dangerous virus”, Putin told Trump.