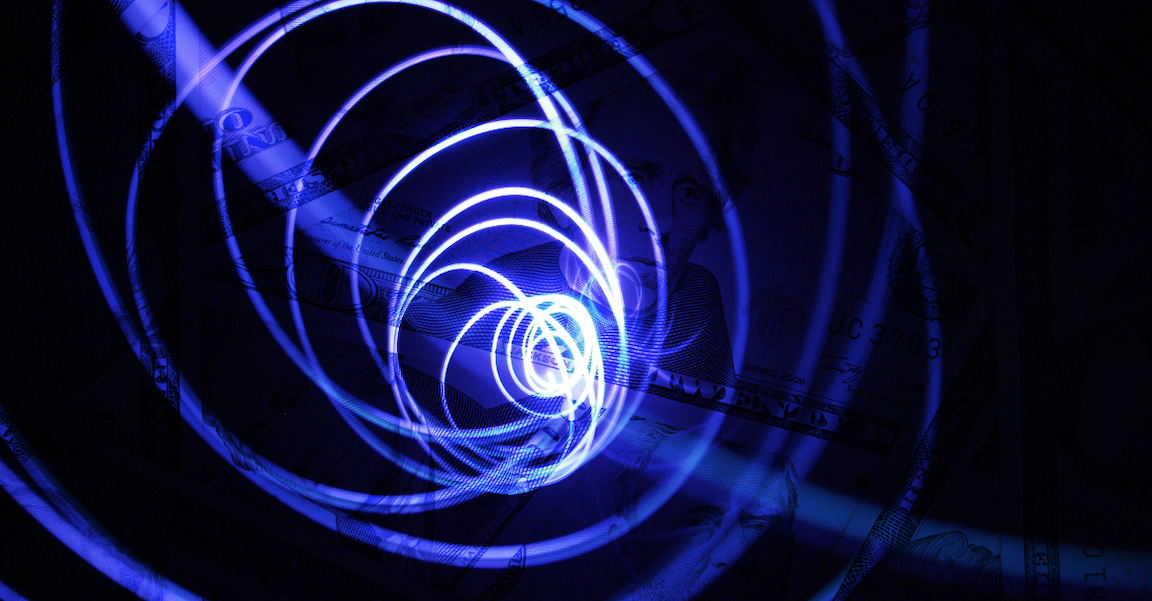 The dollar is in a tailspin.

That would be the story in the financial media right now, were it not for gold’s concurrent surge to near record highs.

The two developments share a set of common causes, deeply negative real rates, aversion to COVID-19 headline risk in the US, and fiscal/monetary largesse among them.

With equities still perched near post-pandemic peaks despite a wobbly week, one could ask what a persistently weaker dollar might mean for stocks. Goldman has some ideas in that regard.

For one thing, S&P earnings obviously have a negative relationship with changes in the dollar. On Goldman’s model, a 10% fall/(rise) in the trade-weighted dollar would increase/(decrease) 2020 S&P 500 EPS by about 3%, the bank reminds you.

Beyond the mechanical read-through for large companies, a weaker dollar is associated with easier financial conditions and helps grease the wheels of global trade and commerce. It also helps ensure emerging markets don’t tip over into crisis. In 2018, the Fed appeared to underappreciate those dynamics, prioritizing concerns about a prospective overheat in the domestic economy in the course of stubbornly hiking rates into the teeth of a worsening trade war. That nearly plunged developing markets into the abyss, as the dollar rose and real yields stateside topped 1% for the first time in years.

The point in that brief trip down memory lane is simply to underscore the notion that the world is generally a friendlier place when the dollar is on the back foot. Risk assets (equities included) like it when the world is a friendly place.

Getting back to Goldman, the bank notes that “the trajectory of the trade-weighted USD also has important implications for the supply and demand of US equities”.

As you’re (hopefully) aware, the corporate bid for US shares (i.e., buybacks) is expected to be around 50% lower in 2020 due to COVID-19. That bid has been the largest source of demand for years. If a weaker dollar encourages foreign investors to buy US stocks, it could help offset the drag (see figure below).

“A weakening US dollar has historically been the biggest catalyst for foreign investor demand for US stocks”, Goldman’s David Kostin writes, noting that “since 1980, annual purchases of US equities by foreign investors have averaged $96 billion during periods when the trade-weighted USD fell by more than 2% versus just $14 billion when the dollar rose by more than 2%”.

The latest TIC data showed foreign investors were active in US equities in May (see “Net Foreign Buying Of US Stocks Hit Record In May“).

From a sector and style perspective, Goldman says that months characterized by a decline of at least 1.25% in the trade-weighted dollar favored international-facing Info Tech and Energy sectors at the expense of domestic-facing Consumer Discretionary shares. Factor wise, momentum, growth and quality shine.

On the flip side, Kostin writes that “in months where the USD rises by 2%, our long/short sector-neutral Value factor has generated a median monthly return of 0.7% [while] firms with high vs. low dividend yields and low vs. high volatility have also performed well alongside a strengthening greenback”.

Beyond that, Goldman notes that obvious, which is just that “when the USD weakens, investors should favor firms with a larger share of revenues generated abroad”.

One particularly interesting dynamic to watch going forward is how the Trump administration (assuming it lasts beyond another three months) approaches a sharply weaker currency. Larry Kudlow and Steve Mnuchin have paid lip service to “king dollar” and Donald Trump has repeatedly tied dollar strength to the world’s purported “faith” in his leadership capabilities. At the same time, a stubbornly strong greenback became an almost daily annoyance for the president during the trade war, and that manifested in incessant attacks on the Fed and exhortations for Jerome Powell to play the currency depreciation “game”.

It could well be that, at least in the medium-term, a stronger dollar simply isn’t tenable as it would undercut the global economic recovery and exacerbate the deflationary drag from the pandemic. The Fed will thus lean against it, especially in light of the FOMC’s efforts to bring inflation back up to target.

2 comments on “What King Dollar’s Tailspin Means For US Stocks, According To Goldman”